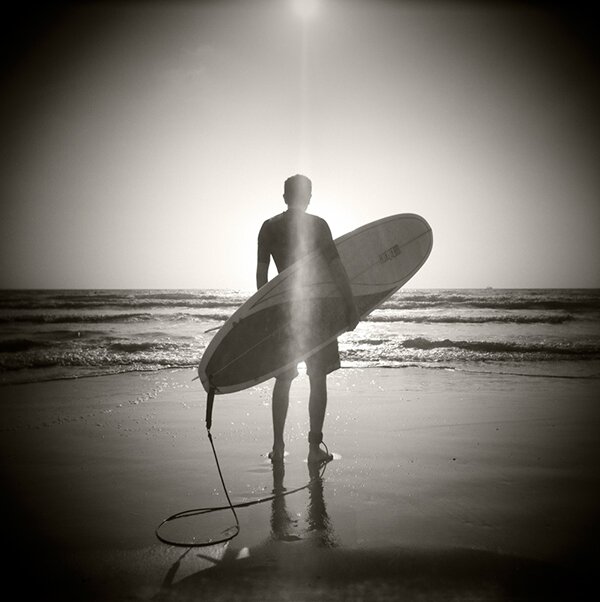 Statement
I grew up in Houston, about 50 miles from the Gulf Coast. My earliest memories of the beach were of family outings and fishing trips with my aunt and uncle to Rockport. I’ve always loved being on the Texas Coast. But when I discovered surfing that love turned into obsession. No one would have confused the surf in Texas with some famous break on the Pacific Ocean, but that didn’t matter. Texas surfers were as maniacally devoted to the sport as surfers are all over the planet. We weren’t proud; we would surf on anything ridable. We’d drive down to the beach with $30 in our pockets and stay for a week, sleeping in tents and eating sandy sandwiches.

My friends and I started riding waves in the mid-seventies, which put us in the second generation of Texas surfers. The first generation were the pioneers from the 1960’s who discovered surfing in California, wondered whether it could be done in Texas, and brought back boards to give it a try. Texas is not widely known for its great surf but, as that first generation discovered, if you know when and where to look and if you look hard and patiently enough, it’s there. There is, after all, over 600 miles of coastline, and the Gulf of Mexico reliably produces lots of wind and waves via low pressure systems, northerns, storms and hurricanes.

When I moved to Austin in the mid eighties and no longer had close access to saltwater, my opportunities for surfing naturally diminished, but my obsession never quite disappeared. I started work on this book twelve years later, in part so that I could re-connect and try to understand what it was about surfing and the Gulf Coast that had made such a deep and permanent impression upon me.

I think of myself less as a surf photographer than as a photographer who loves to surf. The essence of surfing, like most sports, is ultimately impossible to photograph or write about. Dreams and memories inform much of the work here. The photographs, I hope, chronicle both Texas’s surfing past and its present. At the beach nothing ever changes and nothing is ever the same. The same is true for surfing. Board design and fashions may change, but the urge to ride a wave, the search for that next perfect swell, is a timeless human preoccupation.

I think about time as I watch the waves growing into the same forms that were seen by our ancient ancestors. As I watch my kids play in the surf, I remember seeing the Gulf for the first time. I remember countless hours spent with friends and family. Time spent at the beach is a return to the source. An intimate and immediate connection with the natural world. You’re riding a wave and you look around at the fish and dolphins that are riding it too–and somehow it just makes sense. Surfing has become commercialized, trivialized and mythologized, but its primal appeal is pure. In these photographs I hope I have managed to portray some of that enduring fascination, as well as the singular and sometimes unexpected beauty of the Texas coast.

Bio:
Kenny Braun is best known for environmental portraiture, landscape and editorial photography. Music, surfing and photography have been his passions since high-school, each influencing the other. His personal work explores a sense of place and memory by returning to scenes from his childhood. His series on Texas Surfers and the Gulf Coast titled Surf Texas was published by the University of Texas Press in 2014. Other books include the Salt Lick Cookbook published in 2012 and the Jack Allen’s Kitchen Cookbook published in 2014.

Braun’s work is included in numerous private and public collections including the Wittliff Collection at Texas State University. As an editorial photographer his work can be seen in Texas Monthly, Wired, Southern Living, Texas Highways, Spirit Magazine and more. He is represented by the Stephen L. Clark Gallery in Austin.

Tammy Cromer-Campbell photographs commercial, executive portraits, people, places, and things. Her first book was published by UNT Press, Fruit of the Orchard | Environmental Justice in East Texas. She is currently working on the film documentary that originates from Fruit of the Orchard. Her studio/gallery is located in downtown Longview, Texas and on the web at https://tccphoto.com/gallery
View all posts by tccphotoblog →
This entry was posted in Uncategorized and tagged Kenny Braun, Surf Texas, Tammy Cromer-Campbell. Bookmark the permalink.